I’ve been happily using Firefox 4 since the beta stages, and the final version has now been released. One of the headline features of Firefox 4 is WebGL graphics support, but I found that despite updating the graphics drivers on my laptop to the latest version, I was still unable to access WebGL websites (for example get.webgl.org).

The only solution I’ve found is to change one of the settings in about:config. In about:config, type ‘webgl’ into the filter. The preference name that needs changing is ‘webgl.force_enabled’. Simply double click this to change the value to ‘true’: 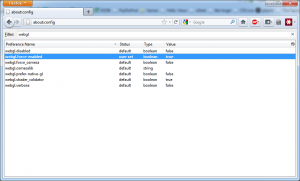 Now, sites such as get.webgl.org should work without any problems!